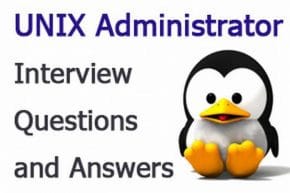 When you are preparing yourself for the interview of UNIX administrator, you need to focus on the core ideas of UNIX that involves some commands. Making yourself perfect for an interview is always a tough thing as you don’t know what you are going to face in the interview hall. It is always better to get an idea about the possible questions that you might be asked to keep yourself ahead in the competition. Those who are applying for the UNIX administrator should have the sound knowledge in the technical concept. Here a set of questions is given to help you out of your doubts.

1 Q: what is the definition of UNIX?

A: UNIX is an operating system (OS) which is designed for both Multitasking and Multi-user functions. This portable OS can efficiently perform on different hardware platforms, which brings a great advantage for the user. The programs are written In C and it allows a user to process the data.

A:   BIOS is the acronym of Basic Input and Output system, which mainly performs the task at the time of booting that includes searching, loading and executing of the boot programs. It is also searching for the boot loader such as CD-ROM, floppy and hard drive. One can also change the boot sequence while it starts up by pressing the F1 or F key depends on your computer.

A: The term of filter is used to refer program that takes input from the standard input point and then perform some tasks on that input to bring the exact result to the standard output. This program can be used in two other programs.

A: Kernel works as the master program in the UNIX operating system that controls the computer resources by allocating them to different users and to the different tasks. It interacts with the user through a shell while logging. The shell is the interface between the user and the system, which works as a command interpreter.

5 Q: Explain the differences between cmp and diff commands.

7 Q: What is incode in the Unix system?

A: an incode is the data structure, which is used for the file system. It contains the details regarding a file that includes the location of the file on a disk, its size, the date of using the file, information about the changes, the owner of the file and other details. Generally, it carries the information of a file.

8 Q: Explain the NFS and its task.

A: The Network File System (NFS) enables one to access the data of remote computer within a network. The file system can appear as another local disk in the computer. A command is used for exporting NFS directories. The soft and hard mount is used for sending the file when it is mounted with soft option that means if the server does not respond, it returns an error whereas the hard mounts uses the retry manner to send the file.

9 Q: What are the responsibilities a shell looks after?

A: A shell looks after lots of responsibilities such as program execution, variable substitution (PATH, TERM, and HOME), interpret the programming language, pipeline hookup and many other things. It also works as an interface between the user and the system.

10 Q: Give an example of the network command used in UNIX system?

A: For the remote log in, the command is telenet. su used for the user switching command in the UNIX system. For transferring the files, one should use ftp and finger is used for the information gathering.

A: VLAN is the acronym for the Virtual LAN used in improving the network performance. It is mainly a broadcast domain works in separating the large domain into small ones. Such kind of domain is produced by the switches and by separating its domain, it improves the network.

One Response to “Unix Administrator Interview Questions and Answers”