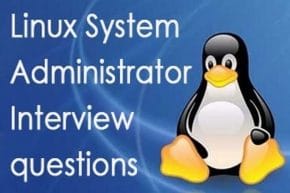 A Linux system administrator is responsible for maintaining the continued operational status of the Linux based computers or networks. Linux system administrators work closely with many different elements within the department. They should be versed in project management systems and network infrastructure. Teamwork is essential for this position. Following are some frequently asked Linux System Administrator Interview questions and answers. You should be prepared with the answers to these questions. The questions are all technical based.

2 Q: What is the difference between UNIX and LINUX?

3 Q:. What are the basic components of LINUX?

A: Like any other typical operating system, Linux has all of these components- kernel, shells and GUI’s , system utilities and application program. What makes Linux advantageous over other operating is that every aspect comes with additional features and all codes for these are downloadable for free.

A: A Graphical User Interface is a human computer interface that uses windows, icons and menus and which can be manipulated by a mouse. A major advantage of GUIs is that they make computer operation more intuitive and thus easier to learn and use.

A: Swap space can be defined as a temporary storage location that is used when system’s memory requirements exceed the size of available RAM. In other words, a swap memory is a space in the hard disk of your computer that operating systems will use to put the info that is actually on the RAM to free it for another application.

6 Q: What is the main difference between SSH and TELNET?

A: Both SSH and Telnet services are used to connect remote machine. The key difference between Telnet and SSH is that SSH uses encryption, which means that all data transmitted over a network is secure from eavesdropping.

7 Q:. What is the advantage of open source?

8 Q:. What is the importance of GNU project?

A: The GNU project allows freedom to run programs for any purpose and freedom to study and modify a program to your needs. It allows you to redistribute copies of a software to other people, as well as freedom to improve software and have it released to the public.

A: The root account is the most privileged account. This account gives you the ability to carry out all facets of system administration, including adding accounts, changing user passwords, examining log files, installing software etc. It is the default account every time you install Linux.

A: A CLI (Command line interface) is a user interface to a computer’s operating system or an application in which the user responds to a visual prompts by typing in a command on a specified line, receives a response back from the system, and then enters another command and so on. The MS DOS prompt application in a Windows operating system is an example of the provision of a command line interface.

11 Q: What is the basic difference between BASH and DOS?