Sample Letter of Recommendation for Graduate School from Employer 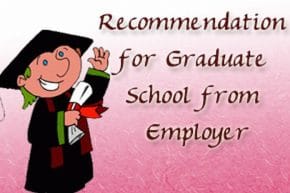 Sometimes employers find it tough job to pen down a professional and smart letter of recommendation for graduate school. We help to resolve this problem at guiding you write a perfect draft. You need to understand that the purpose behind this letter is to inform that the candidate has been able to succeed in his graduate school. You need to describe the strengths and talents of the employee which make him competent for the course he wishes to apply for.

Here is an example sample which can be a great help for the employers in drafting informative and formal recommendation letters for their employees. Customize it as per your need and you will be sorted.

Template of Letter of Recommendation for Graduate School from Employer

I am writing this letter to you with regard to Mr. Jack Cullen, who has requested me that I write a letter of recommendation on his behalf. Jack and I discussed his smart decision to pursue graduate study in Commerce. I strongly support his decision because I feel he has the potential to take his natural talent to higher levels.

I have worked with Jack for almost two years. I headed the team of which he was a member. We share professional subordinate and supervisor relationship. This gave me all the time to analyze and rate his performance and abilities at different times. As the part of the sales team, he has been an enthusiastic and impressive seller for our company who would work hard to crack every deal. His dedication and commitment helped him shine as he would meet his targets with high efficiency.

In these two years, he has shown consistent performance. Jack has always impressed me with his knowledge and dedication which makes him outshine in the group. He is always zealous about taking new opportunities and fulfilling all the responsibilities. Last year, he was awarded as the Best Salesman in our company with a record of unmatched targets. He has impressed everyone in our department with his consistent performance and professional behavior.

Jack is an amazing member of the group. He knows the right style of interacting, communicating and dealing with his team members and the clients which make his so precious. He has even been a deputy team leader of the team where he performed as an exceptional leader. These are some very important and rare combinations to find in a person. He is true gem in every sense.

Jack is planning to leave our organization to attend graduate school; it is a serious loss to us but I have complete confidence that he will add more feathers to his hat by joining the graduate school. Jack is an intelligent, smart, responsible and committed person. I strongly believe that he/ will be an asset to your school.