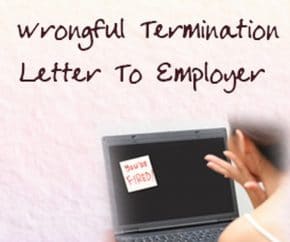 Terminating an employee is never easy. It demands taking into consideration all the details and reviewing it from legal point of view. But despite that sometimes people are wrongly terminated by mistake or because of ambiguity of facts and evidences. In such a case, the best way to go ahead is by writing a wrongful termination letter to the employer stating your case thereby getting this attention on the wrong firing. It should contain all the details because of which you feel that termination is not justified. Make sure you include all the proofs which support your statement.

Below is given a professionally drafted example template for your reference so that you can draft a customized letter as per your need, consisting of all the details in a formal and informative manner.

This is in response to the certificate letter that was issued by you on January 14, 2015. As per that letter, my employment with ABC Technologies Pvt. Ltd. was terminated with immediate effect on January 14, 2015, “no call, no show” clause. As mentioned in the letter that I was absent from work on January 10, 2015 without prior information to my reporting manager. And this happened for the fourth time during a period of eight months that I was missing from work without any information. I would like to present my part on the evidences that have been mentioned in your letter.

As per the schedule, I was suppose to be in office on January 10, 2015 and I agree that I was missing from work without information but it is for the first time it has happened in the last eight months. I have been absent thrice from work during this duration but I have always managed to inform my day manager.

As mentioned in the evidences that you have enclosed with the letter, I was missing from work on September 6, September 7 and September 9, 2014 with my name clearly highlighted and marked with “no call no show” remark. I have reviewed your evidence and now please have a look at mine.

I am quite aware of the company policy, according to which, any change in schedule must be approved well in advance and these changes should be signed by the manager. On September 6, 2014, when I was coming for work, on my way to office, I met with an accident and was hospitalized for 2 days because I had been injured. Due to such an emergency, I could not have the approval of the manager in advance. But my wife called the day manager, Mr. Andrew James on September 6, 2014 at 10.30 a.m. to inform him about my accident and condition. When I joined my duty on September 10, 2014, I was told by Mr. James that the information of my absence from work has been updated in my employee file and no action will be taken as it was an emergency situation.

Please find all the necessary evidences attached with the letter. There is a copy of police report on accident, doctor’s medical report and other hospital bills and records that confirm that I was hospitalized on those three days when I was missing from work. I have no proof to submit that I informed Mr. James and he promised that my absences will be excused. Based on these reasons I request you to please reconsider my termination. I hope to receive your response within one week of the date of this letter.

Letter of Termination for Cause