Sample Letter of Termination for Cause 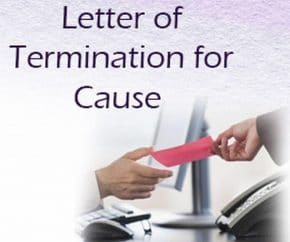 Performance and productivity are essential when a company hires an employee. And when an employee fails to deliver a desired level of performance or doesn’t behave in the good of the company then his termination is called termination for cause. Sometimes there is more than one reason for firing the employee. Usually such a letter is framed by the HR manager or owner of the company and summarizes the employer’s justification for his action. It is always better to include some details of violations and other documented proofs as evidences to prove the allegations.

Here is a format template of termination for cause letter which has been drafted in a formal manner keeping in mind all the basic details which should feature in it.

Sample Letter of Termination for Cause

The purpose of this letter is to inform your employment with ABC Corporation Pvt. Ltd. is terminated, effective immediately. This is termination for cause. We have recorded evidences that explain that you have willfully abused your managerial position to take benefits which have hampered the overall image of the organization. Here is the list of events based on which the management has taken such a decision:

On January 1, 2015, you forcefully asked the finance department to settle your conveyance expenses of $ 1,000 which is beyond the higher limits set by the company. As per company policy, no reimbursement shall be made for personal conveyance usage. There is no possibility that you could have spent such a large sum of money on taking clients out.

Each and every policy of the company has been very clearly mentioned in the handbook and these are also mentioned during the training sessions to bring clarity. You have been one of the star trainers at our company who take orientation sessions for the new recruits and it is in no way possible that you are not aware of these basic policies.

You are expected to return any of the company properties which you have not surrendered yet during the period of one week after receiving this letter. You were handed over a set of documents consisting of details related with your paycheck, pay for unused PTO and commission pay at the meeting. In case you have any questions, you can always write to me on the address mentioned in the letter.

One Response to “Sample Letter of Termination for Cause”