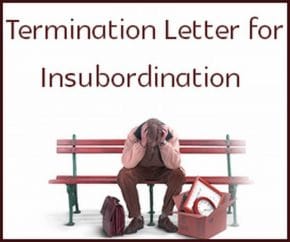 Sometimes an employee is terminated on the grounds that his behavior is abusive or he is a threat to someone else in the organization. This is called termination based on insubordination. During this process, it is needed that all sort of investigation is made before reaching to a final decision and before sending the termination letter to the candidate.

In such a letter, it is really very important to include all the details of the event(s) which have led to such an action against the employee. It is important that it should contain date of alleged violation(s), proofs related with it and the date from which termination will be effective. Make sure that you do not include any detail that is not related with the event. Here is a sample of termination letter for subordination which you can use for writing your customized drafts.

Sample of Termination Letter for Insubordination

This is to inform you that as of January 16, 2015, your employment with ABC Corporation Pvt. Ltd. is terminated. You are dismissed from your roles and responsibilities for cause, specifically for insubordination. All sorts of supporting evidences for ever incident that are mentioned below have been complied in your employee file. Here are some of the events which have been responsible for such an action.

On November 10, 2014, a written warning was sanctioned to you for using abusive language in office. The copy of the same letter which was signed by you has been filed in your employee file. On November 26, 2014, you again showed the same kind of obscene behavior against another member of your team. Again a warning letter was issued to you and it included the final warning of dismissing you in case there is third violation.

Again on January 15, 2015, it has been recorded that you have misbehaved and threatened one of the company employees from your department. As this is the third incident in a row which shows that you are not taking our warnings seriously and you do not wish to behave in a professional manner as mentioned in the policies of the company. This being your final violation, we are forced to terminate you immediately as there seems to be no hope for changes in your behavior.

All the documents like the final paycheck, the accrued and unused PTO and all other documents shall be mailed to the address mentioned in your employee file. On January 16, 2015, we have issued a restraining order against you and hence you are not allowed in the distance of 100 meters of company property. The same applies for the employees you have assaulted and threatened. In case you have any queries then you can send that to me in writing on the address mentioned above.