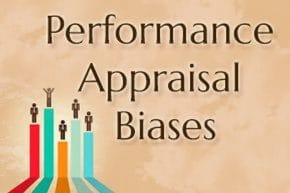 We all are humans and so we have prejudices and biases which become a part of our working and we don’t even know how. That’s the reason managers sometimes make mistakes while analyzing and evaluating the performance of their employees because they let their biases and judgment errors interfere with their decision. As a result of which, the process of performance appraisal gets spoiled. These biases are inaccurate distortion of performance measurement.

This article talks about different types of performance appraisals biases which are generally observed. Let us study each one of them one by one to find out how they affect the decision of the managers.

This effect comes into picture when a manager measures the performance of an employee based on some of his perceived positive trait, characteristic, quality or feature. As a result, he ends up rating the employee either too high or too low in other features depending upon his ranking in any one trait which influences other traits. In case, the worker has been absent from work at few times then while evaluating the performance, manager ends up rating him high in other areas which affect his overall ranking.

TOO MUCH OF LENIENCE OR STIFFNESS

It is quite natural to rate people on your own standards or values or our own mental makeup when we are evaluating. When managers are evaluating the performance of employees at the time of appraisal, they either rank them too strictly or too casually. It is natural for some supervisors to rank people high and some rank people with stiffness. This is so because the former kinds of people prefer taking the line of least resistance and the latter are very particular with rating and hence take assessment too seriously because of which they end up being extra strict. When supervisors rank individuals casually then the system becomes ineffective because there is no differentiation between those who perform well and those who perform average as everyone is enjoying high ranks.

In this kind of performance bias, managers evaluate employee’s performance based on any one negative quality or the feature that they have perceived in their minds. Due to this, they end up giving a lower rank to the individual without taking into consideration other points which are actually related to the performance.

This is yet another very common bias which is quite natural to happen. The way the supervisor feels about every person who works under him will always influence the appraisal. If he dislikes someone then obviously he is going to rank him negatively and vice versa. There can be various reasons for personal biases to occur. It can happen as a result of feedback from other employees, social background or family culture of that particular person.

In such a bias, supervisors tend to evaluate the present performance of an employee based on his past performance. For instance, if the person has not been a good performer then it is presumed to be a bad performer in the present times and vice versa.

In this kind of bias, while evaluating and analyzing the performance, appraisers end up rating all the individuals as average performers. They neither rate anyone too positive nor too negative; rather they maintain a central tendency. This again hampers the evaluation process as there is not much difference between an average performer and an excellent performer.

All these performance appraisal biases interfere with the process and distort the results.