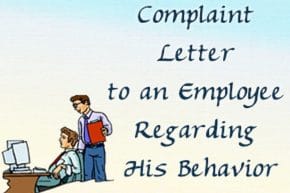 If you are experiencing any kind of unwanted behavior in your company then you must report it at the earliest so that it can be altered as soon as possible. In corporate, the right way of approaching is to write a professionally drafted complaint letter to the HR Manager complaining about the employee who has shown the unwanted behavior towards another employee as a kind of warning.

Here is a step wise procedure concerning the letter writing along with a sample format for your easy reference.

The starting of your letter should contain the past experiences in meetings and discussions with this employee talking about his wrong behavior.

In the next paragraph, mention the incident that took place. You must cite the complete and exact incident along with the behavior of the employee as it will work as the record for future.

Always close the letter with a positive note to improve. You must make sure that you express the feeling that you want your employee to know that you are doing this for his benefit and that the company doesn’t want to lose him. Also make clear that if he continues with his behavior then you will have to take a strict action. Suggest him for some anger management training course which can help him get over this problem.

Make sure that you send three copies of the letter. One should go to the employee, the next copy should be sent to the human resources manager and the last copy should be filed in that employee’s personnel file for record purpose to refer in future if his behavior persists.

Example Format of Complaint Letter to an Employee Regarding His Behavior

With a heavy heart, I am writing this complaint letter to you. This letter is concerning a formal complaint against one of the employees in our company named Robinson Parker. Mr. Parker has been working under my supervision in the sales department from last three years. I have to report that he is nowhere near his sales target and doesn’t seem to be putting in enough efforts to make it happen. In the last three months, he has failed to meet all the targets with no hope for improvement.

He seems to be very casual about his targets as he has paid no attention to the previous letters that were sent to him. His working style and output is just the same. He doesn’t report on time either. I would like to bring to your notice a recent incident that took place on 10th November, where he misbehaver with a teammate. Then on 12th November, 2014 he made a pass at a female employee of the same department in the office. I resolved this matter at my level by making him apologize to the lady. Such an incident makes the company prone to sexual harassment lawsuits.

I have tried speaking with him at a personal level but he doesn’t seem to understand his mistake. There is no doubt that he has been a sincere employee of the company but such kind of behavior is just not acceptable. It is against the company standards and rules.

I suggest that he should receive a formal letter from Human Resources department, concerning his performance issues. If possible then please have a personal meeting with him to find out the issue with Mr. Parker as till the last year, he was a good employee of our company who always delivered good performance. This kind of change in his behavior is something new and shocking.

As per my opinion, Mr. Parker deserves a final chance to improve and correct his mistakes. Rest it is totally your decision whether you wish to retain him or not. I request your urgent attention on this matter.