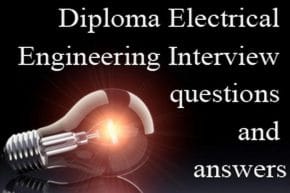 1 Q: What is electric traction?

2 Q: What is the difference between generator and alternator?

3 Q:. What do you know about Active and reactive power?

4 Q: What is meant by derating factor?

A: Derating is a technique usually employed in electrical power and electronic devices, wherein the devices are operated at less than their rated maximum power dissipation, taking into account the case or body temperature , the ambient temperature and the type of cooling mechanism used.

5 Q:. What is slip in an induction motor?

A: Slip is defined as the difference between the flux speed and the rotor speed. Speed of the rotor of an induction motor is always less than its synchronous speed. The speed performance of an electric motor can be calculated by a method known as percent slip. The slip is essential for producing torque that increases with increasing load.

6 Q:. Describe the purpose of transformer in electrical engineering.

A: A transformer is a device which produces or supplies current by switching from high voltage to low voltage. It transforms electrical energy from one circuit to another without any direct electrical connection and with the help of mutual induction between two windings.

7 Q:. What are the essential parts of the Generator?

A: UPS stands for Uninterruptible Power Supply. It is a device that helps provide consistent power to a computer system. It allows a computer to keep running for at least a short time when the primary power source is lost. A UPS contains a battery that kicks in when the device senses a loss of power from the primary source.

9 Q:. What is the difference between induction motor and servo motor?

A: Servo motors are used to control speed systems. It varies the field current applied to the generator which in turn controls the speed of the motor connected. Induction motor will work on synchronous speed. An induction motor has high inertia and servo motor has a very low inertia.

10 Q: What is pu in Electrical Engineering?

A: Pu stands for per unit and this will be used in single line diagram of power distribution and it is like a huge electrical circuit with no components with different ratings. To bring all the ratings into common platform Pu concept is used in which , in general largest MVA and KV ratings of the component is considered as base values , then all other component ratings will get back into this basis. Those values are called as pu values.

A: A transducer is a device that changes one form of energy into another. Common examples include microphones, loudspeakers, thermometers, position and pressure sensors, and antenna.

12 Q: What is the difference between electronic and electrical engineering?

A: Electrical engineering relates to the problems associated with large scale electrical systems such as power transmission from power house to the load. It also deals with electrical appliances and their control. Electronics engineering deals with the study of small scale electronic systems including computers and integrated circuits and their applications to process information.

A: Servo motors are geared DC motors with the closed loop circuitry incorporated within them. The basic configuration of a servo motor composed of a DC motor, gearbox, potentiometer and control circuit. DC motor is used to move a gearbox with a large reduction ratio. The final shaft imposes a force on the external load and simultaneously acts on the axis of the feedback of potentiometer. So, the potentiometer senses the position of the axis and sends a corresponding voltage to an operational amplifier. This voltage compared to the input voltage that determines the desired position of the shaft, producing a voltage in the output of the comparator. This voltage powers the motor such that the shaft moves in the necessary direction to align with the angle that corresponds to the voltage applied to the input.