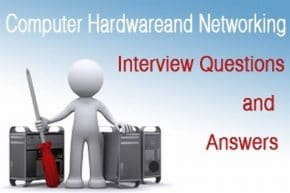 A: A router is a device that forwards data packets along networks. Routers can connect two or more network segments. Router functions in an Internet protocol based network operate at the network layer. Routers store information in its routing table such as paths, hops and bottlenecks.

2 Q: What is the difference between Intranet and Internet?

A: Internet is a broad public network that anyone can access through an Internet Service Provider while intranet is a privately owned part of the internet under which only a selected number of IP’s are allowed to communicate. The primary difference between the Internet and the Intranet is about accessibility.

A: A domain name is the information that you enter into a web browser in order to reach a specific website. Domain name system is the way that Internet domain names are located and translated into Internet Protocol addresses. DNS naming is used in TCP/IP networks, such as the Internet , to locate computers and services through user friendly names.

A: MAC, Media Access Control, address is a hardware identification number that uniquely identifies each device on a network. The MAC address is manufactured into every network card, such as Ethernet card or WIFI card, and therefore cannot be changed. MAC addresses are 12 digit hexadecimal numbers(48 bits in length).

A: Data Encapsulation also known as data hiding refers to sending data where the data is augmented with successive layers of control information before transmission across a network. The user can only perform a restricted set of operations on the hidden members of the class by executing special functions commonly called methods.

6 Q:. What are the different ways of securing a computer network?

7 Q:. Describe the function of the OSI Session Layer.

A: WAN stands for Wide Area Network. WAN consists of two or more local area networks (LANs) and this computer network spans a relatively large geographical area. The largest WAN in existence is the Internet.

9 Q:. Explain the functionality of PING.

A: The functionality of PING command is that it allows to test the connection speed between your network and another network node. Basically it is used to check whether the system is in network or not. By using PING command, you can tell the strength, distance and availability of a connection either in your own network or over the internet.

10 Q: When is a switch said to be congested?

A: It is possible that a switch receives packets faster than the shared link can accommodate and stores in its memory , for an extended period of time, then the switch will eventually run out of buffer space , and some packets will have to be dropped and in this state a switch is said to be in a congested state.

11 Q:. What is the difference between POP3 and IMAP Mail Server?

A: POP3 is a protocol to download and locally store your emails. When your client connects it will download all mail stored in your mailbox and save it to your hard disk. It will then by default delete the copy that is held on the servers. IMAP Mail Server is a protocol used to access and manipulate the contents of the mailbox on the server in real time. You can open mails, create folders to store mails, delete messages from the server and otherwise use the system as normal.

12 Q: What is Gateway of Last Resort?

A: Gateway of Last Resort also known as Default Gateway is used when a router does not know about the destination network of a packet it has received. In other words, it is a route used by the router when no other known route exists to transmit the IP packet. Known routes are present in the routing table. Hence any route not known by the routing table is forwarded to the default route.

13 Q: What is the difference between memory and hard disk space?

A: Memory is RAM (Random Access Memory). RAM is a collection of electronic circuitry where your computer’s programs and data are stored when it is running. The hard disk drive which typically resides in the computer but nowadays external hard drives is also available.   A computer’s memory is used for temporary storage while a computer’s hard drive is used for permanent storage.